One of the headline features in macOS Sierra is Picture in Picture. Unfortunately Apple decided to restrict this to Safari and iTunes which means the majority of users will never get to use it. 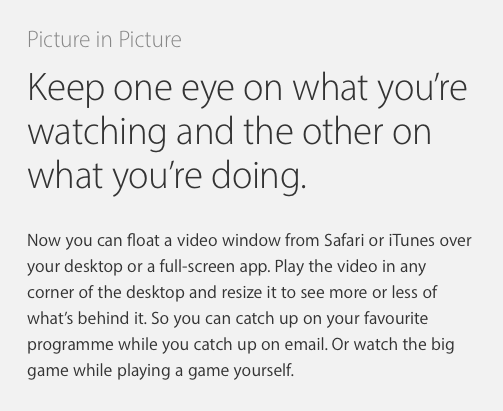 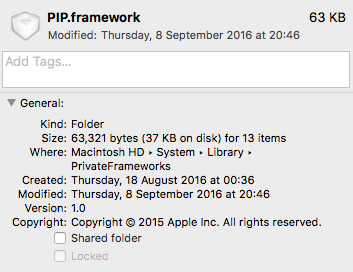 As with any framework it can be included in a project and used like any other. However Apple remove the headers from their private frameworks which stops us from using them freely. I ran the framework through Steve Nygard's excellent class-dump spitting out a number of helpful header files in the process.

Reading through the PIPViewController.h file it gave me I noticed a PIPViewControllerDelegate that the class-dump didn't uncover. Thank fully WebKit is open-source and Apple happened to include the header files for both the view controller and the delegate online and I stumbled across them on Github.

I put together a little test project (at 1am last night so it's far from complete) to figure out how the framework works. Here's what I uncovered:

There are also a number of methods/properties that control the behaviour of the PIPPanel.

Piecing it all together I managed to hack together a project that will present a video in the PIPPanel. The video is in an AVPlayerView and I'm then just presenting the containing view controller. The PIPViewControllerDelegate methods are being used to control the player with play/pause.

Currently the view will not return to its original window when closing the PIPPanel and I'm not entirely sure why. Maybe one day I'll spend the time to figure it out 😊

I'm still unsure why Apple chose to keep this private and not allow developers to use it. Even if it was restricted to the AVPlayerView and functioned in the same way as the iOS PIP it would have been a great addition and I'm sure many developers would have jumped at the chance to add this to their media applications.